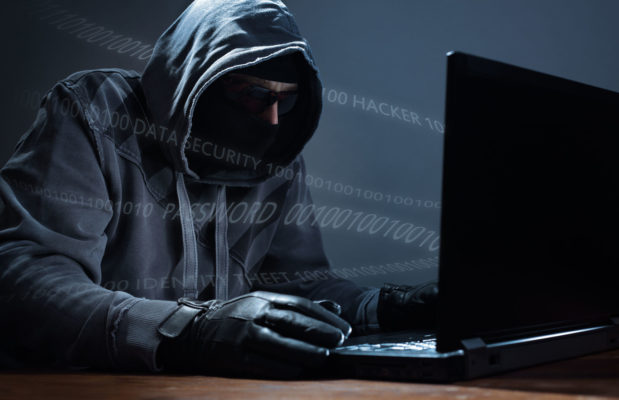 With all the hullabaloo about Hillary Clinton using a private email account, for work emails. Add that to the spring 2013 revelations by Edward Snowden that no communications or data held online by any American company is private. Next I discover former president Bill Clinton has only ever written two emails in his entire life—-I wonder why—-. Then I dig deeper and find; although he’s been a U.S. senator for 12 years, and was a Congressman for eight more before that, South Carolina Republican Lindsey Graham says he has never sent an email.

All this got me to thinking, how private are my emails. So I started to do some research on the subject. What I found out should surprise no one. Up until the late 90’s and early 2000’s most important communication was done by mail. You would write a letter, seal it in an envelope, place a stamp on it and send it. No one could see the contents of your letter as it made its way to the recipient.  Sealed in an envelope the mail was safe from prying eyes. The mail is also protected by several laws to ensure its privacy. Telephone calls are protected by laws such as the Electronics Communications Privacy Act of 1986 (ECPA). Email doesn’t have this type of protection. Email is one of the least secure methods we use to communicate. To be fair email is also covered by the ECPA but it is a law from 1986 and doesn’t give enough privacy protection for how people communicate today. The law has several shortcomings when it comes to email. For example, the (ECPA) allows the police to get access to Americans email or documents stored online that are more than six months old. They don’t have to get a judge’s permission as long as authorities say it’s relevant to a criminal investigation. Can anybody say George Orwell? Our privacy was further weakened by the Patriot Act, a law passed in the wake of the 9/11 attack.

An electronic message usually makes many stops at different computers along the way to its destination. Sending an email is like sending a postcard. Its contents are visible to anyone who sees it while in transit. At each stop, it is possible for someone to intercept and read it. Why would someone do this? Some people just want to prove they can do it. Some may, as my mother likes to say have a “nose problem.” Others are just malicious and want to cause harm and confusion for no good reason. The government could be snooping around among other things.  Google stated Gmail users have no “reasonable expectation” that their communications are confidential, the internet giant said this in a 2013 court filing. Google isn’t saying that its staff are free to read your emails. But that all your emails will pass through its systems, and be scanned by its computers as part of the normal process of delivering them. Almost all, email providers do this; it’s one of the ways they find spam emails and put them in a junk folder. In Google’s case, and some others, your emails are also scanned for keywords that trigger the advertisements shown against them. I assume most Gmail users already know this, and they may agree with Google that it’s better to have relevant ads than irrelevant ones.

Another thing you should be aware of is even after you have deleted a message from your inbox; it doesn’t just vanish. A lot of Internet service providers and email  services archive email, so the message still exists somewhere in the company system.

I’m not saying not to use email services. Although Bill Clinton, Lindsey Graham and my mother don’t use email; I’d be lost without it. I have email accounts with Google, Microsoft, and Yahoo. I want you to know the risks of communicating by email before you send off any sensitive information. How important is privacy to your emails? What steps can you take to protect your email privacy, to make sure you’re safe from things like identity theft, credit card fraud, and other nefarious online activities? The following steps are an excellent start.

Use a strong password. Just like a house needs a strong foundation to stand. The foundation of your email accounts protection is Your password. Your password is the guard at the gate, and the only thing protecting your account from being misused. If someone guesses your password because it is too weak, they will gain total control over your account. Here are some tips on creating a strong password. I also like to combine this with Microsofts advice. You should also lie on the “Security Questions”. My trick is to tell the same lie for all of them. What’s your mother’s maiden name? Dorothy and Toto. What street did you grow up on? Dorothy and Toto. What grade school did you go to? Dorothy and Toto. You get the idea? Remember the answers are usually case-sensitive.

Protect your address. You don’t give everyone you meet your home address do you? Give your email address the same respect. Always ask yourself this question, does this person or business really need my email address? I know that you give out your email address every time you send a message but always use caution when giving it out. Scammers and spammers love to get a hold of people’s email addresses. I have more than one email account, only friends, family and trusted business contacts get my personal email address. I use other  accounts for shopping, registration forms, advertisements, etcetera. I also have a fantastic option for sites that I want to use, but I can’t use them until I give them my email  address.  Guerrilla Mail and 10 minute mail give free disposable email addresses that will self-destruct after 10 minutes in 10 minute mails case, or you can decide what happens to it with Guerrilla Mail.

Don’t access your personal email account from public or work computers. I try to make this a hard and fast rule but sometimes it’s necessary to use a public computer. Follow this advice for safe browsing If you must use a public computer. Always keep in mind that your employer can legally look at and record anything you do on a work computer, if you use them for personal business you do so at your own risk.

Don’t be Tricked. Phishing scams use fraudulent e-mails and fake Web sites, that look like legitimate businesses, to lure unsuspecting users into giving away private account or login information. To be safe, if you receive an e-mail from a business that includes a link to a Web site, make certain that the Web site you visit is legitimate. Instead of clicking through to the Web site from within the e-mail, open a separate Web browser and visit the business’ Web site directly to perform the necessary actions. You can also verify that an e-mail is in fact from a legitimate business by calling the business or agency directly. Here’s an example of a phishing email. 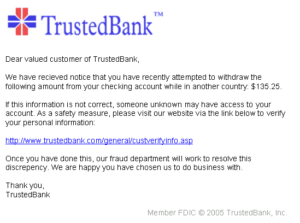 Use Encryption, Sometimes you will want to send sensitive information by email. Encryption is by far the best way to do this. When a message is encrypted  it becomes a garbled, mishmash of characters and numbers that no one can read. When it reaches, it’s destination the recipient has software on their computer to decode it and make readable again. Most methods I have found to do this are too time-consuming and complicated to be used on a regular basis. I only would use them for a little while before giving up and going back to sending my email the easy way again. One simple thing that you can do is make sure that when contacting businesses such as banks or government agencies always use the secure message centers provided by the institution. This is a secure way to contact them, the messages you send and the ones received will always be encrypted and safe from people who should not see them. While writing this post, I found that most encryption services are not free. One that did catch my interest was Enlocked. They have a free plan that will allow you to send 10 encrypted messages per month and receive unlimited encrypted messages for free. Since I would only use it for particularly sensitive emails, encrypting ten a month would be more than enough for me. The reviews are excellent, and it looks simple to use. Yahoo recently showed off its idea to do away with passwords completely and give end to end encryption for your emails. The process is still in the beginning stages and not ready for prime time yet. Yahoo said, it might roll out later this year. There is also a company named Proton Mail; founded on the idea of email privacy. It’s servers are in Switzerland, a country known for its legendary privacy laws, and it promises free, effortless end to end encryption. The company is in its early stages and has a waiting list for email accounts. I signed up today. I got the idea for this post  while watching a Technology, Entertainment, and Design (TED) talk about email privacy and protonmail. You can watch it here, it is very interesting. Well, that’s my message for this week. Enjoy the rest of your week and God be with you until we meet again.
Copyright: / 123RF Stock Photo

Don’t Feel Like Leaving the House? Marshalls Just Made Your Life Easier

How to Keep Windows 10 From Spying on You