A brand-new plant-based burger is headed to a meat aisle in a Super-Market near you. Next, to the pork chops, steaks, and chicken breasts, supermarket patrons across the country will soon find Beyond Meat’s plant-based burger patties.  Beyond Meat and Safeway just made a landmark deal that will put their veggie burgers in a store near you. Safeway owns Vons, Albertson’s and several other Super-Markets around the country. The company has more than 1,300 locations, and the burgers were recently placed in 280 of its stores.

This is Beyond Meat’s first step on the way to its growth into regular grocery markets. The agreement represents a tipping point for the flourishing veggiemeat industry seeking to get new meat alternative foods in front of shoppers. By carving out a spot in the meat section instead of placement in a specialty-foods corner of the store—Beyond Meat wants customers to think about its product the same as meat and maybe give it a try. 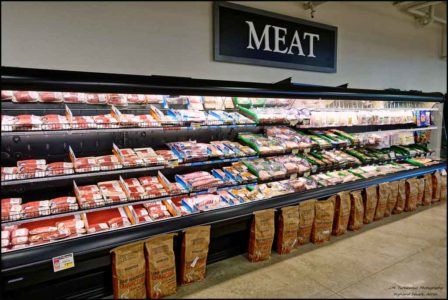 “What Beyond Meat is doing is bigger than meat alternatives,” says Phil Lempert, the grocery-retailing expert who calls himself the Supermarket Guru. “They are opening the door for inviting consumers to think about food in an entirely different way.

The jury is out on if shoppers will try out the new product. But Beyond Meat and competitor, Impossible Foods, are planning to profit from a huge untapped market. Lately, People are more interested in meat and dairy replacements. As science and medical professionals find that red meat leads to health problems such as cancer, people are looking for alternatives. Likewise, the huge animal agriculture industry hurts the planet and employs unfair labor practices. It doesn’t take long to see why folks are starting to look for meat options.

Plant-based meat substitutes may also be another option to what I’ll call Frankenstein meat; for want of a better word. In case you didn’t know, labs at agriculture companies are beginning to perfect lab-grown meats. Meat grown in a Petrie Dish technically tastes the same as animal meat. But, producers don’t have to go through the nasty business of raising animals for the slaughterhouse. For example, this past spring, Silicon Valley startup Memphis Meats announced it found out how to grow chicken meat in a lab without ever involving a real chicken.

Meanwhile, Beyond Meat patties are going on sale in Safeway grocery stores throughout Northern California, Nevada, and Hawaii. You can find Beyond Meat burgers in more than 600 grocery stores around the country. Whole Foods Market also sells their veggie burgers. Michele Simon, chief of the Plant-Based Foods Association, says this is a huge move for the company,

Not surprisingly, some established meat groups are against the methods producers like Beyond Meat are using to reach consumers. Others, including Tyson’s Foods America, can see the writing on the wall. Tyson Foods, America’s biggest processor of meat, appears to have embraced the idea that animal-free meat may be a part of the future. In fact, in October 2016, the company unveiled it had acquired a 5% stake in Beyond Meat for an unrevealed amount. With an eye on the future, this past March, Tyson CEO Tom Hayes acknowledged to investors that plant-based proteins are not a fad.

The model is shifting for eaters and the places where they get their food. We’re already seeing the case for eating less meat and starting to see more products like Beyond Meat and that’s a good thing. See you soon.